Me and the Grey Goose (below) are heading to the OH-2 early Monday morning. For the final 48 hours of the race, I’ll be shuttling canvassers, door knockers and getting people back and forth from the polls. The on-line grass roots community has been amazing for the Hackett campaign, generating over $380,000 at roughly $52 a donor. 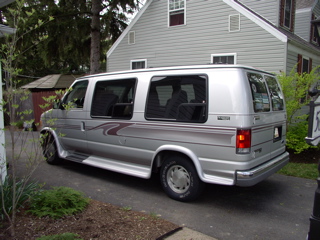 I’m bringing my laptop, hope to do a roundup from the ground of what’s going on, but we’ll see. The odds are Jean Schmidt is gonna get her one year in Congress and that Paul Hackett isn’t Doug Flutie vs. U. of Miami. Maybe so, but the real victory here is the realization that, when presented with a strong, intelligent, authentic Democratic candidate, the reddist of red Ohio Congressional districts is not a cakewalk.

Whatever the outcome, the Ohio GOP and national Republican party especially was forced to bleed a little bit here (to the tune of roughly a million bucks from the NRCC). Keep punching, keep drawing blood, and sooner or later, the underdog gets the knockout. The scandal-plagued Ohio GOP and the over-reaching, out-of-touch, bow-to-extremists-and corporate-lobbyists national Republican party has tanked on every major national issue of Bush’s second term (Schiavo, Social Security, the Iraq war, stem-cell research funding, the Bolton nomination, etc. etc. etc.), setting themselves up for a complete reversal of the 1994 mid-terms that gained them power.