He doesn’t know it, but Glen Hansard and I go way back. Back in my college radio days at WFAL, we received an album in the Fall of 1995 called Fitzcarraldo by a band called The Frames DC.

I didn’t understand what the “DC” meant, maybe they were from the District of Columbia? Wrong on that account. Turned out they were an Irish band and there was already an American band with that name, so the DC was added to avoid confusion. Good enough. 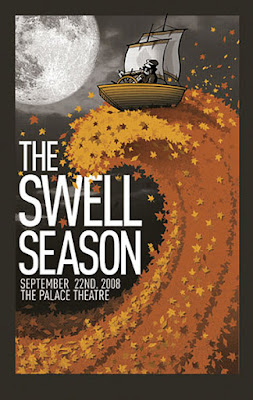 The album struck a chord with me right way, songs like Angel at My Table, Monument and Say It To Me Now were quick favorites that I’d spin on shifts and pester friends about. But there was no info, no other releases that I could find (at the time), and the band seemed like an anomaly. Little did I know that thirteen years later, I’d see the lead singer step out on a stage with only an acoustic guitar and belt out a solo rendition of Say It To Me Now without a microphone.

Yes, you read that right, he sang it, or rather, screamed it at the top of his lungs like his life depended on it to a captive audience, all the while pounding on his well-worn acoustic guitar. It was a fantastic sight to take in.

The Swell Season, touring on the soundtrack for the independent film Once that starred Hansard and his bandmate Markéta Irglová. Although the set focused mainly on album material, songs that would make up their 2009 release Strict Joy were also included, as well as a Van Morrison cover.