This was concert number one of a two-day Fourth of July Weekend trip to Detroit back in 2000, the second day being Sunny Day Real Estate and No Knife. Tracy Bonham was along not only as an opening act, but also to provide vocals on “Judy Staring At The Sun” from the Happy Days album, sung on record by Belly’s Tanya Donnelly.

This time around, Catherine Wheel were touring for Wishville, their only Columbia release and last before the band went on “hiatus” and lead singer Rob Dickinson’s solo career/auto design career. The set was full of tunes from their entire career, reaching back to early favorites off Ferment and Chrome, just the sort of thing you’d want as a long time fan. 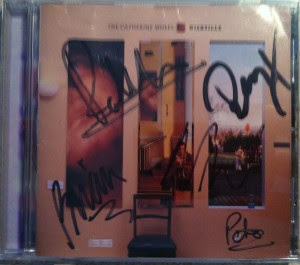 One thing you would not want as a long time, the sort of long time fan that got to the venue early so they could get right up front at the stage, is a shiny-shirted, shaved head, fratboy d-bag and his posse of friends waiting until CW was starting to barrel through the audience, shove people around and force their way up front to scream the lyrics of a few songs and act like complete assholes. But you don’t always get what you want, or what basic common decency and courtesey would prescribe. I actually felt embarrassed for them, as the rowdy d-bag and crew and became more and more obnoxious, even band members were starring at them with contempt.

Luckily, d-bag and crew got bored during the slow songs and went wherever a posse of asshole goes (shots a the bar? coke in the bathroom?), and the show went on. Afterward, we were able to get into the post-show meet and greet that gave us a chance to talk to each member of the band while they signed cds, posters, etc. I remember having brief and awkward conversations with lead singer Rob Dickinson (about college radio, and getting chicken wings during their tour stop in Buffalo) and bassist Ben Ellis (we talked basses, he dismissed my appreciation for the Manic Street Preachers, suggest I check out The Stranglers).
Labels: 2000 catherine wheel concert detroit live music review the intersection tracy bonham