It’s odd how, when the internet fails you, you have to piece things together via random bits of information in order to figure things out. Case in point, there is no info that I could find when exactly this show occured. Now, I know it happened because A) I have an autographed You’d Prefer An Astronaut cd from and B) I bought a gray Hum t-shirt with a blue logo that I had for year before time eventually devoured it. 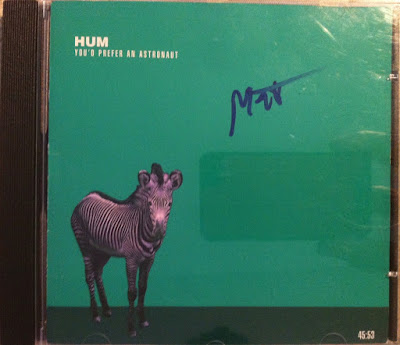 I know that Hum released this album in the spring of 1995, and I know that I didn’t even really discover the band until that summer when I saw the video for Stars late one night on MTV. And here’s the third bit of sleuthing I used to deduce the timeframe: I know I went to the show with a girl I was going out with named Tracey, who I believe I met in the fall of 1995 and continued to go out with into the spring of 1996. How do I know that? Because her friend, Jenn, and I shared an apartment in the summer of 1996, and Tracey and Jenn lived next door to me and my roommates Ben and Charlie that following fall, which is when I stopped seeing Tracey. So, that means this show had to have happened between fall of 1995 and spring of 1996, and I’m betting it’s spring of 1996.

Now, how about the show?

The room, the Underground of the Toledo venue The Asylum, held maybe 100-150 people. It was small with a low celing, and basically looked liked someone’s unfinished basement. A band called Idaho opened, don’t remember much about them and didn’t bother to track down any of there recordings, so I guess I didn’t care for them much.

Hum were insanely loud. Both Tracey and I wore earplugs, but it didn’t matter, the sound obliterated them. The band played there album in full plus a few that, at the time I didn’t know, but as I would track down their back catalog, learn were on their earlier release Electra 2000. As I mentioned, I bought a t-shirt this show and I got an autograph. There’s a story to that.

After Hum finished (I don’t recall if they did an encore or not, don’t think so), they began packing up their gear and a few people approached the stage to chat, ask for autographs, etc. As I was still a novice guitar player, I decided to ask a question about how to play a particular song. I approached lead singer/guitarist Matt Talbot, asked if he would sign my CD cover, and then inquired about how to play the song I’d Like You’re Hair Long, which remains to this day one of my favorite Hum tunes. He explained the song was in Drop D tuning, which I had just learned about, and that the chords in the verses were at the 12th, 9th and 10th frets, but reversed for the chorus sections. I thanked him, went home, grabbed my guitar and played that riff over and over again. I even, after some practice, figured out the lead part played by second guitarist Tim Lash.
Labels: 1995 1996 concert hum idaho live music review the asylum underground toledo