I have evidence I went to this show, as you can see there is an autographed Wally Pleasant ‘Houses of the Holy Moly’ cd, even if I can't remember when it happened.

My best guess is sometime in 1994 or 1995, as I was living in Founders Hall at the time, and the concert took place in the expansion area of the cafeteria, the same place I would play two rock shows, one with 10Watt my final year of college in 1998, and a year later with The Stepford Five, our first show ever. 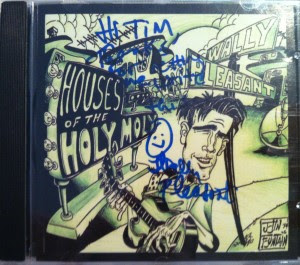 Apparently, Wally is still doing his thing has he’s got a website with current tour dates and lots of albums I never heard. I went back and listened to this album not too long ago, and I’m not going to claim it still holds up, but there were some enjoyable moments in the vein of They Might Be Giants or Ween, two bands I do no claim to be a fan of. Yet, certain tracks still charm me.

I’m fairly certain our radio station, WFAL, had a hand in bringing Wally to BGSU, which is probably why I was even at the concert and ended up buying a cd. Maybe we’ll have him on Dig Me Out someday.

(Update: After some back and forth with Wally himself and some fans on Facebook in 2017, we narrowed it down to Fall of 1994, so while not the exact date, almost there)
Labels: 1994 bgsu bowling green concert founders hall live music review wally pleasant wfal