There are not many people I have on my “must see before I die list,” but Shawn Smith was one of them. Brad, Satchel, Pigeonhed, All Hail The Crown, solo albums – some people are obsessive about Bob Dylan or Robert Pollard, collecting every odd ball release, bootleg, b-side, etc. For me that’s Shawn Smith. I haven’t investigated, but I’m sure a fair amount of my external hard drive is taken up with his recordings, whether they’re studio albums, live bootlegs or Bandcamp demos.

Getting a chance to see him play solo, with just a piano or guitar, to a seated crowd of no more than 75 or so folks at Natalie’s Coal Fired Pizza in the Columbus suburb of Worthington, seemed… bizarre. It shouldn’t be possible that this legend (in my mind) from Seattle would play at such an odd venue, but there it was. 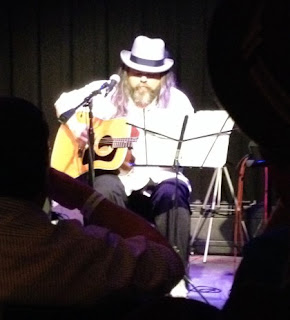 Opening was Happy Chichester, who I had seen solo and with Howlin Maggie many times, and as usual, he did not disappoint. His manic energy, somehow channelling Mick Jagger, Iggy Pop, Stevie Wonder and Frank Black all one lanky, expressive form never ceases to amaze me. He’s managed to evolve and expand his songwriting pallet from propulsive guitar rock to soulful ballads and loop-based drones, while circling back on his most recent album to straight-up rock that made me fall in love with him two decades ago. But like I said, Happy has been on the Columbus scene forever, while most night’s he’d be the main attraction, tonight my mind was on Shawn Smith.

I could say he played the perfect set, but that would discount the 30 or so other songs I wanted to hear. Getting the chance to hear thundering piano of Not Too Late, the steady groove of The Day Brings, the stately swing of Wrapped in My Memory, and the gorgeous re-imagining of Mother Love Bone’s Crown of Thorns was just the tip of my fan boy iceberg. Shawn has never gotten his due, and the business of music seems to not be interested in a man who has without a doubt one of the most unique, interesting and gorgeous voices of the last 20 years.

Maybe he’ll always be on the outskirts, toiling away with self-released albums and low-budget tours, but I would like to believe that the public will catch up to him one day.
Labels: 2014 columbus concert happy chichester live music natalie's ohio review shawn smith