I like Jack White. Not enough to buy albums, catching the occasional song on SiriusXM has been my maximum investment, though I did enjoy him in the It Might Get Loud documentary.

It was my wife’s idea to go, my first arena concert in many years, and tickets were available through my office, so we made it a date night, got sushi before the show and ended up in pretty good seats eye level, stage right. Openers Chicano Batman were fine, but they locked into a rhythm and stuck with it for much longer than either of us really wanted. I nice, tight half-hour to forty minute set from the opener is all I need in most cases. 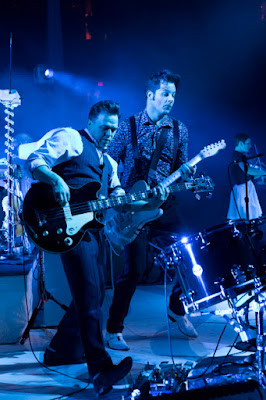 White started the set vamping on The White Stripes ‘Icky Thump’ before starting into his solo material, sprinkled with well know Stripes tunes, a Raconteurs song, a couple of covers before an encore that really served as more of a second act, with fifteen songs before the break and twelve after.

Although I was well aware of Jack White “the personality,” seeing Jack White live gave me a better appreciation for him as a songwriter, a player, a band leader and a performer. Even though his voice quickly went ragged and his guitar playing wasn’t note-perfect, he’s simply operating at a level of abandon rarely seen in today’s manufactured and manicured pop stars.

I might have to go out buy one those records soon.
Labels: 2015 columbus concert jack white live music ohio review schottenstein center