There are bands on my imaginary bucket list to see live, and then there are things that pop up that are so imaginary they don’t even appear on the bucket list. So fantastical I could not conceive of them ever occurring, so I did not. Seeing Failure play last year was unexpected pleasure as no one expected the band to get back together, let alone release a great new album in The Heart Is A Monster.

But then this year they announced the inconceivable – a 20th anniversary tour to play their masterpiece, Fantastic Planet, in full from start to finish. Unfortunately, no Ohio show was announced, so I ponied up the cash for tickets and a hotel room to travel to Chicago and see the band, luckily on a Friday night. It became quite the trek, as my wife and I brought along our 4-year old daughter as well as our neighbor and her teenage daughter, who had never been to Chicago and offered to watch our daughter while we went to the concert.

Seeing the band in the Double Door was an insane experience, as the club is tiny, only holding a few hundred, and Failure’s sound is huge. After grabbing a limited edition poster (which was quickly framed upon returning home and mounted in the basement man cave) we parked ourselves in a spot to the left of the stage just a few standing rows back. Unfortunately, being early also mean standing around for quite a while, and after a long wait, the night started with about a half-hour experimental film before the band took the stage. 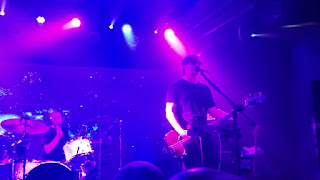 It was, of course, insanely cool to see the band live, and hear the sounds of Fantastic Planet replicated nearly note for note. Unfortunately, after the hour wait and then half-hour film, about forty-five minutes into the concert, both my wife and I were suffering from some old people problems – cramped and sore leg and feet. Luckily, there was an upstairs balcony with seating to retreat to, but the good sight lines were taken, so we mainly just listened to the final two or three songs of the main set and start of the encore. During the last song, we decided to head out and park ourselves outside the club where the bus was parked to see if we could chat and get autographs. However, the exhausted band made a quick b-line to the bus from the club door and me not being the confrontational type, let them walk past without a word, even though drummer Kellii Scott had been a guest on podcast twice.

Rather than wait around to see if they would step out (they did), we decided to grab a cab and head back to the hotel. It was, no pun intended, a fantastic night, and we had a great time the next day walking Chicago on a nice fall day, seeing sights and giving our neighbors a quick tour of the city we’ve enjoyed visiting a few times over the years.
Labels: 2016 chicago concert double door failure fantastic planet live music review