New Book Out Next Month - Are You Making A Sound? The History of The Stepford Five

One month from today: Are You Making A Sound? The History of The Stepford Five will be released on the 20th anniversary of the first The Stepford Five show, the band I spent ten years in playing bass, singing backup, booking shows, writing web content and more.

Here's the backstory - last year I came to the personal realization that I needed to put a period on the end the proverbial sentence that was the band. We held our last practice sometime in 2008, and then just stopped showing up. I continued on for a year playing music with lead singer Keith Jenkins in his solo band, along with Jason Dziak on drums and a rotating bass player depending on who was available, but by end of the 2009, I was done playing music altogether.

I didn't realize it, because I didn't have a good understanding of it, but when the band was dissipating in 2008, I was heading into a pretty big emotional funk for a few months. My life would change drastically, I met my future wife in March of 2008, and would turn my attention to writing that year, something that had been a website only activity for a long time. It's now the regular creative outlet that shares time with podcasting and music making on my own.

During the life of the band, I was the archiver. I kept almost every setlist, gig poster, a list of all our shows and who we played with, plus any other ephemera. All the pictures that were taken usually ended up in my position, at first physical, then digital. I've carried these around for a decade, from room to room, home to home. Putting together this book helped condense all that stuff, and eventually between the book and the online presence, they will be disposed of, as I can't imagine burdening my daughter with all of it.

Putting together the book, something unexpected happen - hindsight opened up some pretty interesting roads to travel down. Taking a big picture look, I was able to see what we did as a band that was forward thinking and innovative, as well as what ultimately led us to dissolve. I also saw how the world changed around us. We started prior to the existence or domination of Facebook, Twitter, Spotify, Google and so many other online and mobile outlets for interaction and music consumption. It was truly a digital wild west, and we did our best to navigate it.

Ultimately, this book is about personal closure. The rest of the band gave their okay to make it happen, but none were interested in contributing. I understand, we all process our pasts differently. Deciding to be in this band was a massive leap of faith for me. I had three gigs to my belt, with very little music knowledge or experience, when I ended by college internship in the summer of 1998, and decided to sleep on my friends floor in order to make a go of it and be in a band. Keith and Jason worked in their fields, and Mark was a college student at the time. I was the one finding odd jobs to pay the bills and stay afloat to make music, a different mindset that when the end was reached, left me with a very open-ended existence.

Since then, life has gone different directions for all us. Though he's moved to Texas, Jason and I still talk almost every week doing the Dig Me Out Podcast (as we have since 2011), and I recently reconnected with Keith and we're playing together in a Pearl Jam cover band. I ran into Mark here and there over the years, but ours was biggest age difference, and at times we could be like oil and water - not great for a rhythm section. He also relocated to Texas, and we haven't talked in person for several years.

I don't have expectations for this book, that would be ridiculous. It's a footnote of a footnote, nothing more. People who were around the Columbus, Ohio music scene might get a kick out of it, maybe not. But it's my footnote, and I'm content with that.

On March 20th, the book will be available via Amazon in paperback and Kindle versions. 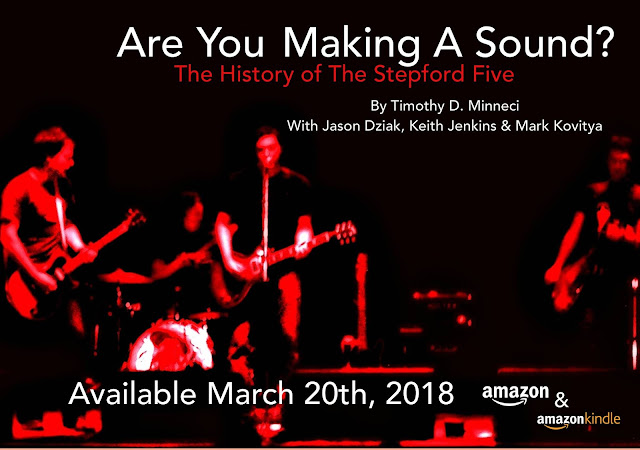