This tweet by Wilco inspired a thread on the band my history with one of my favorite artists.

Quick thread on how much of a Wilco nerd I am. Back in the day, I worked at WFAL Falcon Radio (RIP), the AM alternative rock station of BGSU in NW Ohio. I discovered the band when their debut A.M. came out and arrived our out station as a promo.

I played it, loved it, bought the CD at @FindersRecords and went backwards to discover Uncle Tupelo, sideways to discover The Jayhawks. This when I became an "alt country" fan and would be dubbed by my friend Keith Jenkins "Uncletimcovolt," a nickname I proudly utilize to this day.

Sometime in September of '96, we receive a promo for the upcoming album, the single "Outtasite (Outta Mind)." WHOA. This was rockin' in a way that Casino Queen or Box Full of Letters did not rock. I was psyched, send me that album! A few weeks later, they did. 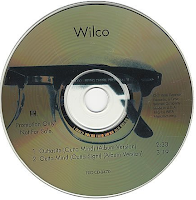 Being There radio promo arrived sometime in October, went through the music department, we picked the singles, and then one night, I snuck the album out of the studio and took it back to my dorm room. The plan was not to dub it, the plan was to type out all the lyrics. WHAT. 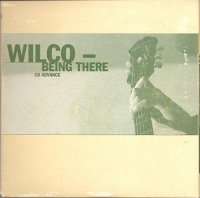 Before social media, reddit, etc. there were listservs, message boards, email groups and a few early fan website. The Gumbo pages was one of them, home to a Wilco lyric and guitar tab collection, which is where I learned to play guitar.

I was intent on contributing to this website that I spent so much time on, and because I had Being There weeks before the release day, I could now sit down and transcribe the lyrics for all the other Wilco fans who would be clamoring for every scrap of info. And so I did.

If you go to the Being There lyrics link, via an old text file are my first draft of lyrics (I misunderstood some stuff), including some corrections by other folks, including a dude at NASA, which is pretty cool. 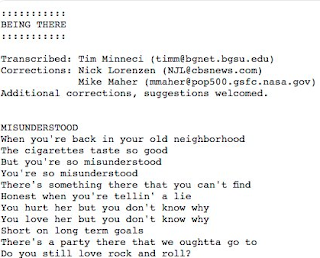 I got pretty bold and put my knowledge of 3 or 4 chords to the test and actually transcribed "Outtasite (Outta Mind)" for guitar, which lead to me playing music in public for the 1st time at an apartment jam session with Keith Jenkins and friends, singing offkey with no shame. 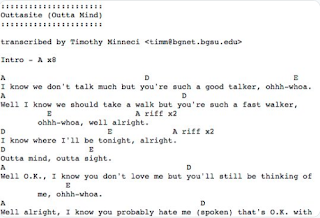 For as much of the internet that gets wiped or relegated to the Wayback Machine it's pretty crazy to think someone discovering Wilco for the first time might stumble upon lyrics and guitar tab I furiously typed out some late night in my dorm room 22 years ago.

And it goes without saying that, no only do I still own my original CD bought back in October '96, but I sprung for the deluxe 4x colored vinyl box set that came out last year. So yeah, this is top five all-time greatest album for me, never changes, always there.
Labels: twitter wilco