(Note: this was going to be just a straight-up concert review, but then it got derailed by my brain)

Back in 2006 I traveled to Chicago, IL. to take in a concert by Josh Rouse at the Black Orchid. That sentence, by itself, is completely average and mundane. I was in my twenties, in a band, and going to see live music was something I did almost any weekend. I had actually been to Chicago once before, briefly in 2003 to play a venue called The Note with my band The Stepford Five and our friends Miranda Sound, along with a pair of Chicago bands (Woolworthy and Light FM), on a short tour put together by Donewaiting.com. I managed to do the tourist thing and grab a Chicago Dog at a place around the corner from the venue, but that was the extent of the sightseeing as we had gigs the day before and after that required lots of driving.

Here's the part, in dusting off my memories of this trip, that are putting my brain through a bit of a workout. I went with a girl named Amy (not her real name), who I had met through the music scene here in Columbus and we hung out a bit. We weren't best friends or dating, just a casual "hey, let's hang soon" sort of thing, usually with a group of people. She was a grown-up compared to me, owning a house and having a real job, and liked to go to the Short North galleries that featured local artists, something I wanted to do, but wasn't finding the time to do so. She also listened to music I didn't. She introduced me to Kanye West, thanks to a loud sing-along of "Gold Digger" in her VW Beetle along with several of her female friends on our way to one of the nicer bars in town I never hung out in. She also introduced me to Josh Rouse.


I've always been more a band appreciator, so singer/songwriters like Rouse were not always on my radar. Thanks to Amy, I got into his albums 1972 and Nashville. In late 2005 it was announced he'd have a new album out in early 2006, and some tour dates were popping up, which included this date in Chicago, too which Amy asked, "do you want to go with me?" On the outside, I was "yeah, sure, sounds like fun," while on the inside my lacking confidence and timid self was more like, "is something happening here?" Of course, nothing was happening, because I never indicated interest as such. Or if I did, it was so broad and non-committal, it could have been read as just basic human kindness, because I was pretty terrible at basic human kindness for most of my twenties (and some of my thirties).

Being a six hour drive from Columbus to Chicago, this meant in addition to getting tickets, we'd also need a hotel room. Now it's getting truly weird and awkward. Who paid for this? Did we even discuss sleeping arrangements? Who knows.

We drove into Chicago and prior to the show, met up with some of Amy's friends at a tapas restaurant near the venue. I didn't know what tapas was, because I was still in my poor musician phase and would regularly consume items off the Taco Bell value menu based on whatever loose change I could pull from the seats of my car and call it a meal. So tapas, while being annoyingly tiny portions, was also (in my view) unreasonably expensive. Whatever, I went with it, then off to the venue.

The Black Orchid was described as "supper club" style seating, which gives you the vision of the Copacabana in Goodfellas, but was not. It wasn't anything like the Copa. It was rows of folding tables. It was more cafeteria than Copacabana. The opener was a guy named Luke Doucet, who I have no recollection of, but as of the writing of this is apparently still an active musician. Josh Rouse came out, dressed in a button down collared shirt with rolled sleeves and a sweater vest and his acoustic guitar. He played songs of the albums I was familiar with, plus some earlier cuts, as well as tunes from his upcoming record Subtitulo, which I liked, but never really connected with, and lost track of his career from their, checking Spotify now again to see what he's been up to (which is, consistent, but not my thing). 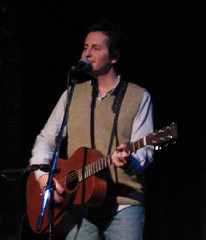 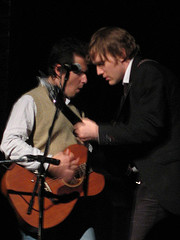 (Photos from the Chicagoist)

The thing I appreciated about hearing Nashville and 1972 live was just him and guitar, fingerpicking or strumming tracks that on record were layered with overdubs and full fleshed out. It's always nice to know when a musicians output isn't the result of production. He was pretty chill, chatting with the audience on occasion, having just come in from Spain where he was then living and writing music. Now, at my current age, I would appreciate the opportunity to sit at a show, but back then it was weird, especially because from what I can remember, the rows ran perpendicular to the stage, so everyone had to sort of angle themselves toward the stage, instead of their being natural rows with sight lines. Not the worst venue to see a show, but definitely odd.

After the show, Amy and I went to our hotel. Our room had a single king sized bed, perfectly reasonable for two adults. I had no idea what was going to happen, but I certainly didn't expect THAT to happen. It took an even weird turn when Amy announced her stomach was bothering her and she would be sleeping on the small couch in the room. Maybe it was the tapas, maybe it was just the realization we'd have to share the bed, whatever it was, we survived the night, had hotel breakfast and booked it back to Columbus the next day. If you're wondering, "Tim, did you offer her the bed?!?" my answer is, I don't know. Probably not (again, not a good human).

After that, there wasn't much more to our relationship. It's almost like that trip was a litmus test, and we (or I) failed in some way, because we stopped hanging out and eventually lost touch. I have no idea what to make of that whole period, and since this was pre-social media, there are no Instagram posts of Facebook check-in's to reference for clues. Just chalk it up to another odd life experience. And a concert, don't forget the concert.
Labels: 2006 chicago columbus concert donewaiting.com josh rouse light fm live live music miranda sound music review the note the orchid the stepford five woolworthy