This show was something of a personal disaster, and it probably a strong contender for why I don't enjoy going to big venues for shows. Isn't that a fantastic way to start a concert review?

I was never a huge fan of The Cult. I liked a few songs off of Sonic Temple, Love and Electric, but I was actually more of a fan of their odd 1994 self-titled album, as well as Ian Astbury's solo Sprit/Light/Speed from 2000. In the spring of 2001, the new album Beyond Good And Evil was still a few months away from being released, but it was a big deal the band was back together after several years apart, and the first single "Rise" caught my attention. Yes, it had the big Bob Rock production and down-tuned guitars, things that would usually turn me off, however in this instance, I was psyched. So when my friends and bandmates Keith and Jason were getting tickets, I said count me in. 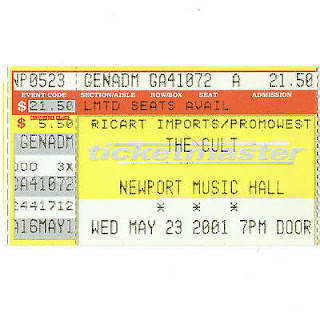 As a concert goer, I tend to be pretty chill. I just want to stand, nod my head a bit, enjoy the music and performance. As soon as we walked in and found a spot on the floor, I knew this was not going to be that kind of evening. Maybe it was the hard rock vibe the band gave off, though I always thought of them as a bit more artsy and adventurous, but the crowd was full of amp'd up assholes. The kind of guys shoving through the crowd, looking to agitate someone into a confrontation. I have never understood that inclination, and I was immediately on edge as The Cult started, opening with the single "Rise."


Because this was essentially a reunion tour, the place was packed, and for May show, it was quite hot. This, combined with a pre-show meal, plus the anxiety of being bounced around by assholes, started turning my stomach, and about halfway through the show, I realized I was in need of a bathroom. But here's the thing about the Newport - the bathrooms were (and are) atrocious.

For the men's bathroom, you walk into a big open room, and straight across are open toilet stalls. Which means, if you need to do your business, you have to do in full view of everyone entering the bathroom, most of whom just want to make a quick left to the urinals. I decided that, based on the churning going on, there was no way I would utilize the Newport bathroom, which put me in something of a bad spot - leaving the Newport meant missing the rest of the show. Next door was (and is) a Chipotle, which based on visiting other Chipotle locations, was pretty sure had a much nice bathroom situation. I made the decision to abandon the show, and head next door.

Lucky for me, the Chipotle was still open and had customers, so me hurrying through to the bathroom went unnoticed. Well, probably at first. I utilized the facilities, but this was an abnormal situation, and extended time was needed. Eventually, there was a knock on the door, as the Chipotle was closing. I got the message, finished up, and got out, which left me standing on the sidewalk outside the Newport for quite awhile waiting for the show to end and my friends to come out since we had driven together, who were obviously confused regarding my disappearance.

There's no lesson to be had here, other than if this happened today, I would have just taken a Lyft home and texted my friends I wasn't feeling good.