For a brief, glorious moment, The Darkness were a lot of fun. Actually, it was more like a year. In Summer 2003, the band released their debut album Permission To Land. Over the top Freddie Mercury-ish vocals with massive glam metal guitar riffage? It was Buckcherry with a sense of humor, or Steel Dragon with a sense of taste, one of those out-of-nowhere, completely uncool-its-cool popular culture happenings that seem preposterous in retrospect, but at the time was a lot of fun. 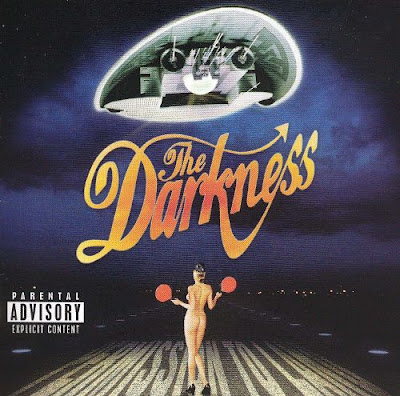 I played the hell out of that debut album, learned various riffs on guitar, and generally enjoyed something so out of sync with the times, which was dominated by Arcade Fire, Modest Mouse, The Killers, Franz Ferdinand, Kanye West and a lot of other very good, but also very serious, music. The Darkness were not serious, and it's good to have a balance, or at least that's what I've learned over the years. If all you do is listen to a very narrow sect of sounds, you're going to either burnout, or becoming boringly repetitive.


With almost a year of pumping Permission To Land on my home and car CD player, it was with great excitement that my friends and I were going to get to catch them live in town on what ended up being a very nice June evening at the Promowest Pavilion (now rechristened Express Live!). My expectation was this was going to appeal to the crowd I was familiar with - folks in their 30s/40s that had grown up prior to the alternative/grunge takeover of the 90s listening to 80s metal. I was kind of wrong.

I should have known that the more aggressive side of The Darkness would bring out the bros - looking to shove some people around after a half dozen beers or so. I should have expected that, but I didn't. I also didn't expect that security at the show would be such gigantic assholes, but then again the overlap between the bros and the security assholes was probably fairly close.

It's worth mentioning because at someone during the set, I believe during the song Love Is Only A Feeling, Justin Hawkins was carried on the back of a security guard through the audience while playing guitar. Now, this would be cool, but as the security detail surrounding him moved forward, it turned into a massive body tossing wave, which ran smack into my group of friends. I don't know why this needed to happen this way, but was unnecessarily violent and just stupid, and it amp'd up the bros around us, who ended up getting punches in at the security guards, and generally turning our area into a sea of testosterone stupidity.

Did I mention that I generally just like to watch the bands play?

For some reason, this show has disappeared down the internet black hole, as I cannot find any info about it anywhere, which is odd, since the band is still fairly active. After Permission To Land, I tried to keep up, but the magic with this band was definitely on the debut. I've liked a song here or there, but that's about it. Some music is of the moment, and this is definitely the case of The Darkness.
Labels: 2014 columbus concert live ohio outdoor promowest pavilion review the darkness