This one is sort of a cheat, because I was actually a part of this bill. The Stepford Five opened for Hot Rod Circuit and Ultimate Fakebook at Bernie's, thanks to meeting the gents of Ultimate Fakebook a month earlier at the Blind Lemon in Cleveland, where we also shared a bill (along with Mars Electric). We got to talking, as bands occasionally do waiting around before, during and after the bands played, and we ended up being added to this bill. 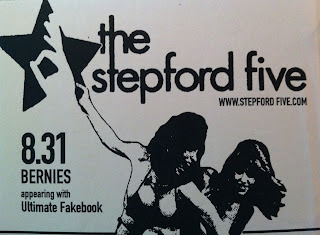 Both Hot Rod Circuit (If It's Cool With You, It's Cool With Me) and Ultimate Fakebook (This Will Be Laughing Week) had really great records out at the time with a couple of years under their belt, while we were still pretty green half way through our second year as a band. From what I recall, it was just going to be UFB and us, and then HRC were added to the bill. Memory doesn't serve me well here, not sure if this was a one-off for them, or if HRC and UFB ended up doing more dates together.

What I do remember is that it was a hot August, and this being Bernie's, which was below ground with low ceilings and less than stellar bathroom cleanliness, the place had a pretty awful odor. While I admired the dive bar credibility of Bernie's, I never really enjoyed being there. Claustrophobia and social anxiety were a potent mix to have me eying the exits, but on this night I kept it together. Prior to the night kicking off, I chatted with UFB bassist Nick Colby. He showed me his very nice vintage Fender, and explained that he changed his strings every night based on some sort of endorsement deal he had. That was mind blowing, as I barely changed my strings once every six months, let alone once a day. I mean, good bass strings weren't cheap!

So we opened, played a mostly uptempo set, and closed with a Motley Crue cover, which probably went over well, as there was a ironic/not ironic appreciation of certain 80s hair/glam metal (re: KISS) in the indie rock community. I remember being mildly disappointed that the HRC guys were nowhere to be found, as we were young and hoping to connect with established bands for future opening opportunities. They were probably hanging outside where it was less stifling hot, and I cannot exactly blame them. 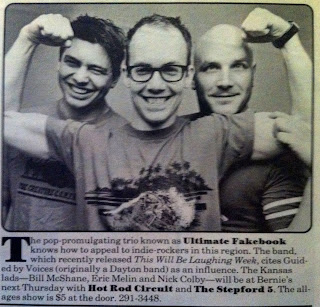 UFB were great, just like at the Cleveland show, and decades later I ended up getting to chat with Bill and Eric from the band on Dig Me Out. It's amazing how much volume and sonic space they were able to cover as a three-piece. I remember liking HRC as well, though I didn't love the follow-up album they came out in 2002, as the band changed its sound a bit.
Labels: 2000 bernies columbus concert hot rod circuit live live music ohio reviews the stepford five ultimate fakebook