In the late summer of 1998, I finished my college internship and was an official graduate of Bowling Green State University. In September, I packed up a moving van and relocated from Buffalo, New York to Columbus, Ohio. It's the last major move I've made, as Columbus has been my home ever since. I moved without a job to start but instead the idea I was going to make music with my college friends, Keith and Jason.

One of the reasons I wanted to make music was because of The Afghan Whigs. I had discovered them a few years early upon the release of their fourth album Black Love, which remains to this day one of my favorite all-time records. So the move was timed well. Upon first arriving, I caught Wilco and The Tragically Hip together at a free show in Bicentennial Park. A month later, Soul Asylum would play a costumed Halloween show at long-gone Mekka. Getting to see the Whigs on tour supporting what would be their just-released fifth album 1965 made me pretty sure I'd made the correct decision to make the move, even if it meant working a temp retail job while the band got off the ground.

At the time, I didn't know the long history of the Whigs and Columbus. How they had cut their teeth diving here in the late 80s/early 90s playing places like Apollo's with bands like Royal Crescent Mob, Scrawl or Barbed Wire Dolls. I had been to the Newport Music Hall a few times to see bands, and this time I was going to see one of my favorites with the added assist that a former college radio cohort had gotten us backstage passes to meet the band.

The band was, of course, great. Dulli was on fire, with the band expertly backing him up. They played a heavy amount of new tunes, plus tracks from every record I knew while tossing in a few choice covers (Prince and Rolling Stones, off the top of my head). Highlights were many, but getting Marcy Mays of Scrawl on-stage to sing "My Curse," which does on the record, was a magical sight. 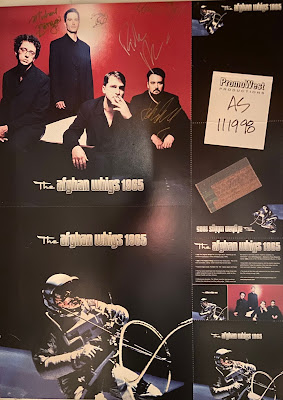 After the show, I managed to get a promo flat, which was signed by everyone in that incarnation of the band (except Dulli), and hangs on my wall, along with the backstage pass and concert ticket.