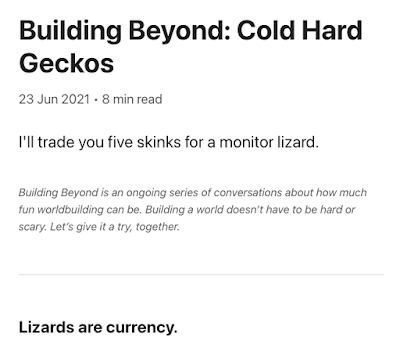 I had the pleasure and honor of participating in Sarah Gailey's Worldbuilding writing exercise "Building Beyond" for their Stone Soup newsletter. If you are unfamiliar with Gailey's writing, get yourself acquainted - The Echo Wife, River of Teeth, Magic for Liars - any would be a good start.

The series is based on a simple concept - give someone a premise and then they write about it. Every Wednesday the newsletter goes out, and it's been fascinating to see what happens with each new prompt from the pair of contributors chosen to contribute. Space Mouth? Orca P.R.? Hell is real and on earth?

The premise I was tasked with was this: Lizards are currency.

My mind went to a number of places immediately. Is it an underground currency? Unregulated? Odd connections started happening and my first thought was this: the Sopranos is rebooted, and Christopher is trying to explain the hot new post-bitcoin/NFT rage in criminal currency transactions to Tony and Paulie Walnuts. It was a lot of Tony being nonplussed, Paulie cracking jokes, and an exasperated Christopher.

I slept on that idea, but when woke up with a different take - lean in on my decades of working in corporate America, watching mind-numbing training videos, and combine that with a peppy sales spiel. I think I wrote it in a furious coffee-fueled haze on Sunday morning over about two hours.

You'll have to read the whole thing for yourself but at one point I typed the word "off-world," which has meaning if you grew up watching early 80s science fiction movies. When I got to the end, I knew I had to pay off that nugget, even if just for my own edification.

I've never written based on a prompt before, and my only fiction writing has been The Black Sky. I have some ideas for short stories but haven't gotten to them, so this was my first attempt at really anything besides a novel.

Anyway, here's where you can READ IT. Hope you enjoy!