I Can’t Quit You: The Journey of a Buffalo Bills Fan

I really had no choice in the matter. By whatever random roll of the cosmic dice, I was born to a family in Buffalo, New York, and because of that, I am a Buffalo Bills fan.

I am a strong believer in the concept that if your town has a sports team, you root for that team. If you’re born in say Columbus, Ohio, you can be more flexible – Cleveland Browns or Cincinnati Bengals. Born in state without any professional football, the world is your oyster. Not for me, and that is my cross.

As a young Buffalonian, I don’t recall much of my Bills fandom. I know I attended my first game on November 20, 1983 at Rich Stadium, then and now the home of the Bills. It was against the then Los Angeles Raiders, and the Bills lost. I was nine, and a few rows back from where I was sitting with a friend and his father who brought us, a fight broke out late in the game. It could have been between a Bills fan and a Raiders fan, it could have been between two Bills fans, who knows. All I remember is that within seconds an adult got pushed into me and I was covered in beer. An incredible first experience, by any measure.

From 1983 to 1987, my Bills intake was fairly passive. I watched the occasional games, which were occasional only because the team was so horrific they were rarely on television. I was more familiar with Joe Montana, Jerry Rice, Tom Rathman and the 49ers than most of the Bills players, who suffered through consecutive 2-14 seasons in ’84 and ‘85 before miraculously doubling that in ’86 for 4-12, and finally limping to a  7-8 record in the strike shortened ’87 season. 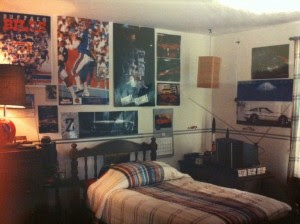 (Above - Bedroom in Buffalo)

I’m not sure exactly when, but at some point in the 1988 season I began to feel something for Bills games I had never felt before: excitement. They started out with four consecutive wins before dropping a bad loss at Chicago. Still, 4-1, there was something going on. And it kept going on. The Bills rattled off seven straight wins culminating in the infamous 9-6 overtime victory against the Jets that clinched the Division. This is the game then voice of the Bills Van Miller coined the phrase “fandemonium” as ecstatic Bills fans rushed the field and tore down the goalposts.

The Bills finished 12-4, won their Division playoff game against the Houston Oilers before travelling down to Cincinnati and losing to the Sam Wyche/Icky Shuffle Bengals. If you want to know where my dislike of the Bengals comes from, you can trace it to this loss. 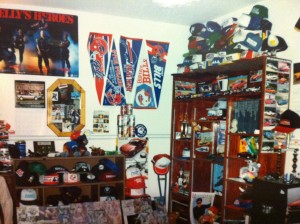 (Above - Bedroom in Buffalo)

The ’89 season was a downer, the Bills fought internally and lost a wild playoff game in Cleveland to the Browns. In retrospect, I would rather be losing wild playoffs games than deal with the misery that was the Bills of the ‘00s, but I’ll get to that later. By a cruel twist of fate, after losing a heart-wrenching game to the Browns, my family ended up moving to Cleveland in the following months. Salt, meet wound.

The ’88 and ’89 seasons were really the innocent years. I loaded up on all the Bills memorabilia I could find, and family members were happy to oblige my obsession. I decorated my room with as many posters, pennants and anything else with a Bills logo. I saved newspapers, cut out pictures and made collages. I even got to go to a few games with my Dad, some wins, some losses, but these were good teams and they were always entertaining. 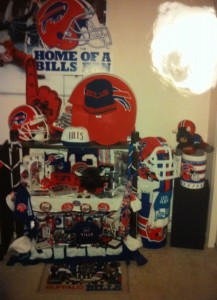 (Above - Bedroom in Cleveland)

The opening game of the ’89 season was at Miami, at the time the hated rival of the Bills. They fell behind and staged a late comeback, and with only seconds quarterback Jim Kelly, not the most agile of passers, took the snap inside the five yard line, hesitated a second, and then darted into the end zone for a 27-24 victory. I was watching the game in my bedroom, my Dad in his, and as soon as Kelly crossed the end zone line, we both screamed, ran out of our rooms and high-fived about ten times in .3 seconds. This sort of joyous celebration would not last long thanks to two words:

Now that the Bills had been to the playoffs for two consecutive years, and by all accounts were getting better, the 1990 season, my first as a resident of Ohio, took on even more importance. I was now living vicariously through the Bills, as they were my weekly connection to my hometown. However, as they racked up the wins, the sheer joy of winning gave way to the fear of losing. Wins were less and less exciting, more of a relief. They were supposed to be winning. The losses were like punches to the gut. They rolled to a 13-3 record, beat hated Miami in the Divisional playoff game and then pounded the then Oakland Raiders 51-3 in the AFC Championship Game.

My Dad and I drove from Cleveland to Buffalo for the Raiders game, sat in horrible seats in just about the last row of the stadium which I’m sure he overpaid for, and watched the Bills dismantle the Raiders. It was so lopsided, we left at the end of third quarter with the score 41-3, drove back to Cleveland and watched the end of the NFC Championship game. For the two weeks leading up the Super Bowl, it was a combination of nervous anxiety and excitement. And then it happened. 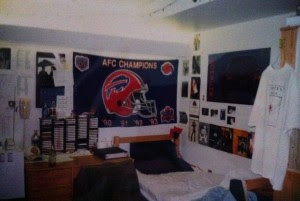 (Above - Dorm room at Bowling Green)

I’m not ashamed to admit I cried. All my teenage emotions were wrapped up in that team, and they released in an emotion that would become all too familiar to Bills fans: disappointment. Bitter, gut-crushing disappointment.

The following year, Thurman Thomas lost his helmet and the Bills looked unprepared, losing badly to the Redskins in the Super Bowl. The next year at college, I and sat watched the Cowboys dismantle the Bills the way the Bills had dismantled the Raiders just three years earlier. Of course, the Bills helped with a mistake after mistake, but it was pretty clear who was the better team. And finally, the Bills returned in ’93, again against the Cowboys. They played tentative, nervous and conservative, and lost again. I sat in my dorm room, and as the clock wound down I got up, grabbed my coat and left. I walked around the campus for an hour. There was zero fun left in it anymore, and I was burned out. 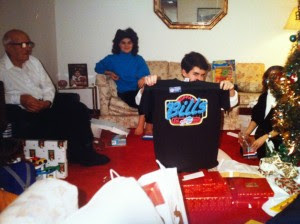 (Above - One of the many, many gifts I received that was Buffalo Bills related)

It’s fun to play the “would you” game with the Bills. Would you trade the four Super Bowl losses for one win if that meant the Bills would never made it back during your lifetime? That’s good one. I remember watching an episode of the X-Files in the early nineties in which the character of “The Smoking Man,” who was apparently involved in running the planet, made a crack about “the Buffalo Bills will never win the Super Bowl.” It wasn’t a prediction, he was dictating it. And that’s what it felt like. The same cosmic forces that said, you, you’re going to be a Bills fan, we’re now saying, you, you will be a forever suffering Bills fan.

Even though I felt burned, it never stopped me from defending my team. When fans in Buffalo started piling on the team after the fourth Super Bowl loss, I defended my team the best way I could, writing about it.

To be honest, the rest of the ‘90s are a blur. I know they made the playoffs a couple of times, most of the stars left at the end of their careers and played for other teams. All except Jim Kelly and his center Kent Hull. They retired on the same day, which I thought was, for a team that wasn’t all touchy-feely, kind of a touching thing, and not because for several years Jim had his hands under Kent’s ass.

All this suffering culminated in the last infamous playoff appearances, now dubbed “The Motor City Miracle.” You know it, the one in which the Tennessee Titans use a bad call to score a cheap playoff win on the last play of the game. Par for the course, at this point. Which leads us to “this point.”

Since that “miracle,” the Bills have no only not made the playoffs, only once have they even sniffed them. They’ve alternated between mediocre and bad, usually with either a ridiculously porous defense or an unwatchable offense. And yet, here I am, still planning each Fall Sunday around the regular season schedule. Still hoping for wins when everything in my brain tells me the team cannot compete. The question is why.

Obviously, there’s the whole being born there and unwittingly hitching my horse to this train wreck of an organization. People call the Raiders a train wreck, but they’ve won Super Bowls. The Bills had a good stretch, six to seven years if you’re feeling generous, but nothing equals a Super Bowl.

I could have ignored the NFL, but that seems impossible. Whatever neurons in the brain that determine likes and dislikes, my was wired for competition from an early age. I was drawn to the Bills like moths to the proverbial light. But I was also a Sabres fan, and my interest dropped off considerably when we moved away from Buffalo, even as the team was making deep playoff runs. Fantasy Football could be to blame, but I think my interest in NFL increased overall, not my passion for the Bills.

It has gotten to the point where losing is so normal and routine; I just want to avoid the gut-wrenching losses. I want to avoid watching Tony Romo get picked off five times in the first half of the 2007 Monday Night Football game, only to see the Bills squander a lead and watch Nick Folk kick a game winning field goal with no time left. Or watch the Bills fall far behind the Browns in 2008, again on Monday Night Football, fight their way back into the lead, watch Phil Dawson kick a field goal to take the lead back and then have the Bills miss the game winning field goal with seconds left. I could go on. The ‘00s are riddled with almost wins punctuated by stupefying collapses.

In my darkest times, I curse the Bills and demand they leave town. Los Angeles, you can have ‘em, I think. And then I dismiss it, because having a perpetual loser is better than no loser at all. It’s a sad position to be in, when the best memories are ones from twenty years ago, but that’s what it means to be a Bills fan. There’s really no end point to all this, unless of course the Bills start competing and winning again, which seems ridiculous. But you got to believe, I guess. Or as Van Miller used to say, you gotta Bill-lieve.

And like clockwork, the Bills have started toying with me again. They’ve started the 2011 3-1 with amazing come-from-behind wins in consecutive weeks against the Raiders and, more importantly, the previously unbeatable New England Patriots. Of course, when there is sunshine with the Bills, I’m always on the lookout for storm clouds.

Week four, the Bills up 10 with less than five to play, and what happens. They blow it. Cincinnati, the hated Bengals, lead by a rookie quarterback, rally to win on a last second field goal.