You Can Go Home Again, Sort Of: Bowling Green

I’m not shy about my appreciation for my Alma Mater, Bowling Green State University. Probably because it’s an underdog school – in sports it lives in the shadow of Ohio State football and basketball, in hockey it’s perpetually good, but not great. The campus is a hodgepodge of buildings from different decades, with no central design theme or coherence. It’s notorious for the windy and cold winters, lacks the party school cool of Ohio University, the snob reputation of Miami of Ohio or the historical importance of Kent State. It is the ugly stepchild of higher education in Ohio, and yet everyone I know who went to the school loves to go back and visit.

Perhaps its the combination of small town and small college that gives the area a true college town feel. I can’t imagine the same experience at Ohio State considering the college is so massive and encompasses so much of what is Columbus. There seems to be little difference between Ohio State and Columbus. Just like at BG, things on and around campus have changed at Ohio Sate, but considering if the music store or sub shop closes near campus, there are already five more in operation, it doesn’t seem like all that big a deal. When the music instrument shop or BW-3s in BG shuts down, it’s a big deal because they’re the only ones in town. The changes are much more dramatic and hence, the passage of time seems much more radical.

Since graduating in 1998, I’ve had a dozen or so chances to go back. In the first few years, it was to play gigs with my band. I’ve been back for a few football games, a 51-28 win over Missouri in 2002 and a 24-14 loss to Akron in 2005, and a hockey game with my wife and brother-in-law Mike while he was a student there. I try to sell people on the quirky greatness of BG, but most don’t see it, which is not unusual as I’m not immune to both finding things interesting that others don’t while not finding things interesting that most do.

This Fall, I decided I wanted to head back for a football and hockey game, which were two of my favorite things to do during my time at BG.

For the football game, my friends and fellow BG alums Keith and J (and ex-bandmates) and Keith’s wife and BG album Wendy all piled in my car for a drive up to see the football team play Temple on October 22nd. Of course, this began with a discussion of where we would eat prior to the game, because all things start with eating in BG. For some reason that is confounding to outsiders, BG has a ridiculous amount of good food establishments. We settled on a BG staple, Easy Street Cafe.

East Street Cafe was and is a BG landmark. Back in the ’90s, the downstairs was the place you’d go if you wanted a trademark Club Sandwich, whether it be the standard Easy Street club or the Chubby Checker, my lunch of choice on this particular trip being the standard, or one of the many sandwich choices. At the time, the bar upstairs was also Easy Street, and had a small space for bands and weekly open mic nights, where I cut my teeth playing live, including one set with Keith that featured us covering R.E.M. and Jimi Hendrix.

After lunch, it was off to the SBX (Student Book Exchange) to grab some BG swag. Anyone who goes to BG is intimately familiar with SBX, because at some point you’re probably going there to buy a book for class. But things have changed. What used to be sandwiched between two businesses in a tiny strip at Wooster and Manville is now the predominate business having absorbed the corner business. This led to a discussion of he various businesses that had moved in and out of that location before SBX annexed it. When I got to BG in 1992, the corner bar was called Mark’s.

I had my first drink of alcohol in college at the end of my Sophomore year in that bar, so I have a warm spot for it. Sometime in the mid-90s, Mark’s gave way to a new bar with a dumb name like Shooters or something. By the late 90s or 00s, the bar was gone and WG Grinders had moved in. It’s odd to think that one of my seminal college experiences took place in what is now racks of hoodies and t-shirts, the same place where my friend J was now looking through racks of clothes for his toddler Zora.

After SBX, we headed over to park for the football game, but made a trek over to the new Stroh Center basketball arena, a beautiful new building that stands out like a sore thumb on a campus that is a mixture of traditional college buildings (i.e. old) and 70s concrete minimalism. We were all impressed with the massive falcon statue outside the arena, especially the well-crafted talons, only to learn many were upset that the statue wasn’t bigger.

The game itself was a bit of a let down, at least what we saw of it. Neither offense did much for three quarters, and midway through the third we decided to grab dinner before taking off for Columbus. That meant a trip to Mr. Spots, known for their subs. When we arrived, I pointed out a new addition to BG to Wendy. The Cookie Jar, a bakery, delivered fresh baked cookies, a concept I’ve been in love with since I learned about it a few years ago. Wendy ran across the street and placed an order.

As we followed the game on our iPhones and downed Mr. Spots subs, our cookies were made fresh for us to take on the ride back home. We decided to listen to the game on my car stereo, which led to an awkward moment in which I couldn’t figure out how to turn on the FM radio as I only listen to SiriusXM Satellite radio.

Of course, after leaving the game is exactly when the offenses started firing, and a back and forth scoring pattern started with BG taking a 6-3 lead early in the 4th quarter. A few minutes later, Temple drove and ran in the first touchdown of the game to take the lead 10-6, only to have BG battle back with a TD of their own with under eight minutes to play. Temple had a number of chances, but the BG defense held their own, and we drove back to Columbus with box of hot cookies and a win. Not a bad day.

One of the people I’m always unsuccessfully trying to convince about BG’s unique specialness is my wife Katie. When we started dating, her brother Mike was graduating from high school and would be heading off to BG the following Fall. Over the years, we ended up making several trips to see him – move-in day Freshman year, his performance in Godspell, a Shakespeare in the park performance that got cancelled, dinner and a hockey game and others.

This time around, it was just the two of us. Like the football trip, the day started at Easy Street Cafe. I decided to break from the Club Sandwich tradition and get a burger, but not any burger – an Elk burger. Anyone had an Elk burger? Not me, and since I’m a fan of all meats, I decided to give it a shot. Turns out, it’s a lot like Bison – lean, less fatty, and still delicious.

Because of high school playoff football at the football stadium, parking got a little crazy but we managed to find a spot not too far from Anderson Ice Arena. The spot, actually, was right infront of my freshman dorm, Batchelder, and we parked in the same small row of spots my parents parked in when I moved in my Freshman year back in 1992. After a quick stroll through the park between the quads we arrived at the ice arena just in time for the puck to drop on the Falcons game against Canisius College.

For all the improvements the football stadium has received over the years, and the building of the new basketball area, it was both reassuring and little disappointing that Anderson Arena, except for a few new posters and banners, looks exactly the same as when I arrived as a Freshman in ’92. The one thing that had changed was the crowd – the arena was half-full, which was probably due to the combination of an early 4:05 start and an unexciting non-conference opponent, but perhaps also due to the fact that BG hasn’t been great in a long time.

I don’t know if they still draw when Michigan and Ohio State come to town they way they did in the ’90s, when you had to get there early to secure a seat or you were standing ten deep along Zamboni entrance doors. Those games were loud, high-energy affairs thanks to the vocal student section armed with an arsenal of chants for every occasion.

The game itself was fairly tight and BG was clearly the better offensive team, dominating shots on goal during the first period to take a 1-0 lead. It was at this point Katie and I left our seats to stroll around the stadium, and when the second period started we stood by the glass near the Zamboni doors to watch the play, which is always an exciting view. The breakneck speed and inherent violence of hockey is undeniable when you view from ground level, and even though the board and reinforced plexi-glass protect you from the action, it’s still natural to lean back a bit when a collision occurs right in front of you.

The second period was more of the tight back ‘n forth until Canisius tied it late in the period, followed quickly by two BG goals making it 3-1, which we be the eventual final. We stuck around until about eight minutes to play in the third period, and then trekked back to our car to make one final stop a The Cookie Jar to grab some treats for the road.

Both trips were fun and worth it. There is an element of nostalgia and “remember this and that” upon the returns, which some might considering clinging to the past, but I don’t. We are the collected experiences of our lives, and returning to them from time to time can be not only worth a good story worth retelling, but a insight on the present. There were some formative experiences that, as I get older, start to lose their origins, or that I’ve never truly understood until years later. If going back to BG, or Buffalo, or wherever, uncovers those moments, then it’s worth it.

And have I told you how good the food is? 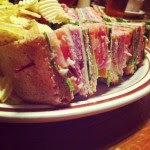 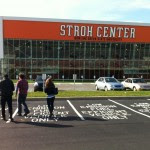 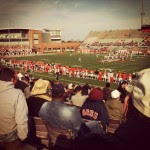 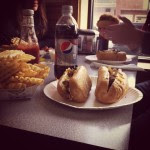 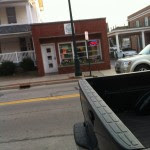 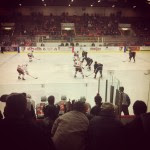 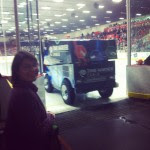 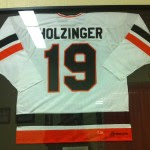