Make no mistake, I’m a huge Jay Farrar fan. Uncle Tupelo? Love all those records. Son Volt? The first two are favorites, since then it’s been diminishing returns. The solo output. Well, I dig the first one, and that’s when this show happened, combining material from all three phases of his career. Since then, my attention has wandered, listening to a new release once or twice and then tossing it aside. 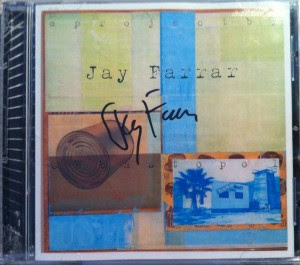 This particular show was just Jay and a guitar, joined by an additional multi-instrumentalist on a few songs. When I saw Jay a few years earlier fronting Son Volt, he was, for the most part, reserved and stoic through the whole show. Take away the energy of loud bass, gutiars and drums, and Jay was even more reserved. There was very little talking, sometimes four or five songs would run into each other, only interrupted by a guitar or tuning change, at which point Jay would mumble something inaudible into the microphone.

Despite the onstage frostiness, after the show Jay sat on the edge of the stage for quite some time signing autographs and talking with fans. He was friendly and engaging, an interesting contrast to his onstage persona.
Labels: 2001 columbus concert jay farrar little brothers live music review son volt