While previous Pinterest projects have focused on more decorative ideas, I also found a number of very practical ideas that have turned into projects. The first one I tackled was for the kitchen. To the left of our refrigerator there is a floor to ceiling pantry. The bottom two units had two shelves a piece, the smaller top two had one shelf each. We soon discovered the problem with these units – depth. In order to reach a can of soup in the back, all of the items up front would have to be removed. And for someone like me who bakes a lot, trying to organize the flour, sugars, baking chips, extracts and various other items was not fun. I found a number of different approaches to building pull-out drawers for the pantry.

Using some leftover wood from the previous homeowner, as well as a discarded set of drawer rails, I built a prototype drawer and installed it in the pantry. Having worked out the mounting and spacing issues to ensure the drawer opened and closed smoothly, I felt confident enough to head off to the local big box hardware store to purchase more wood and build a complete set. Here’s a look at how the pull-out pantry drawers turned out: 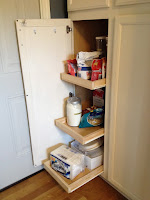 The second project was for under the counter. while there was storage space, there wasn't any shelving. That meant the pans we were keeping there were just piled on top of each other. Rather than build just a shelf, I decided we need something sturdier. I didn't have much of a plan, just measurements.

I ended up with the base of the drawer, but added bigger end pieces, rounded at the top, with some rounded wooden bars along each side. Now the pull-out caddy contains all the pans and such that were previously stacked on top of each other. 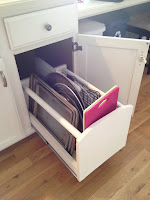