Recently I spent time with my parents on vacation, and while discussing some quirks of my childhood with my wife (apparently I missed several weeks of first grade with illness, of which I have no recollection), I mentioned that when I was in grade and high school, I often watched the local and national news very intently, much more than intently that I was studying based on my grades. I was deeply invested in Tom Brokaw and Peter Jennings, learning about the Iran-Contra Affair, junk bond king Mike Milken and the invasion of Panama.

During the second semester of my sophomore year of high school at Williamsville South in Buffalo, New York, we had a creative writing assignment. I didn't write down what the topic was, only "Purpose: fiction" and "Audience: Anyone" on the top of the page (along with the date: 4-20-90), so I was clearly thinking four-quadrant box office with this. The title was "Evening News: 2031," making this my first attempt at science fiction writing at the tender age of thirteen. 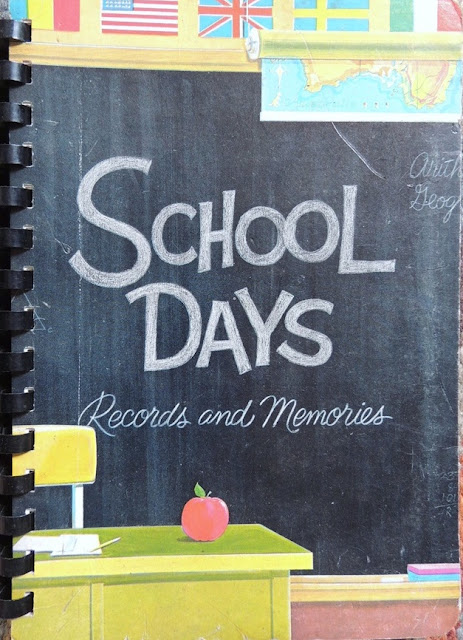 My mom kept a School Days book (do people still collect school info the same way?) and tucked this into the sleeve for tenth grade, so I dug it out upon returning from vacation and gave it a read through. And you know what, it isn't terrible. I transcribed so no one has to read my awful cursive handwriting (grammatical errors have been included for accuracy).


Good Evening ladies and gentlemen, its January second twenty thirty-one, welcome to the world tonight. In the new today, for the tenth straight week, terrorists strikes have ravaged the streets of Moscow. Soviet police are blaming these attacks on the same terrorists that killed Soviet president Alexander Siolkov last month. The explosion today (was) at Moscow's new central monorail station, only six months old. An arriving monorail packed with explosives detonated about noon Soviet time killing fifty-eight people and injuring one hundred and two. All totaled over the past ten weeks, there have been two hundred and six killed and over five hundred people wounded. New Soviet president Nickoli Makarov said that if the terrorists are caught, they will be shot on sight.

In other news, the "Hubble" space telescope was finally recovered in the Gulf of Mexico today after four years of searching. "Hubble" was launched almost forty-one years ago and crashed to the earth in the year twenty-ten. The space telescope brough the people of earth pictures of such planets as Uraco and Andial.

General Motors announced today that the Chevrolet Corvette, the worlds best selling sports car over the past seventeen years, will be outfitted with a new fifty thousand volt electric engine producing a mere seven hundred and fifty horsepower. The engine will lower the weight of the automobile approximately seven hundred pounds and lower the price to the sub ninety thousand range. The Corvette is the last automobile from G.M. to have the new electric engine replace the old methanol / gas fuel engine.

Today marks the twenty-fifth anniversary of the assassination of former president Dan Quale. As many remember, president Quale was in Honduras, one of the Japanese owned countries when he was killed by Honduran troops. This began what is now considered the third major world war in which the U.S. took control of all of the Latin and South American countries and in which the U.S. and its allies destroyed Japan in a single nuclear strike. In a related story, scientists said it will take another ten to twelve years before the island of Japan will be able to sustain human and organic life. Back in a moment.

And what did that get me? Here was the note from my teacher: "Good - your report is interesting and funny. You go the "new-style" of narration down nicely." My grade was a 93 out of 100, dinged for several spelling and grammar errors.

Critiquing it now, some of it doesn't work. Why did we wait so long to search for the Hubble in the gulf? The Dan Quayle stuff is trickier. I guess I'm assuming Bush won re-election in 1992, and then Quayle won in 1996 and 2000. Backtracking from 2031 twenty five years is 2007ish, so it doesn't quite add up. Perhaps he lost in 1996 and then bounced back in 2000 for to terms or ran in 2004? Who knows why may teenage brain was thinking.

The Moscow stuff also interests me. The Berlin Wall fell in November 1989, about six months before I wrote this. Calling them "soviets" repeatedly was accurate at the time as the U.S.S.R. dissolution had not yet occured. Of course I predicted a third world war. The 1980s were nothing but constant fear mongering about the eventual third time the world would try to destroy itself, so it was only a matter of picking an enemy and a reason.

The stuff about the Corvettes was definitely because I was a huge car geek as a kid. GM was six years away from selling the EV1 electric car, but electric cars and vehicles have always been a key part of speculative fiction, so that makes sense to me. I probably saw a concept car at one of the many auto shows I made my dad take me to the 80s, so it was on my mind no doubt. At some point, I did a multi-page book report on the history of General Motors, and cars were often crammed into any writing I did in grade school.