My love for The Afghan Whigs is well known. I had already seen the band live twice before, but it's been almost two decades since I attended their "farewell" show at Bogart's in Cincinnati in 1999. I never felt robbed by their reunion. Yes, by the end it made sense, and the Twilight Singers seemed to be taking Greg Dulli in a new and exciting direction. The end of the 1990s seemed like a logical place to put the breaks on the band, who while finding devoted fans never achieved mainstream success they some of their odder brethren did during the decade.

It may be a blessing in disguise that Dulli & Co. didn't score one of those out of nowhere massive hit singles. Living up to that success has done damage to other artists, and in some cases after failing to find a follow-up, putting them on ice permanently. With the Whigs, they were always on the precipice. For whatever reason, it just never happened.

With The Twilight Singers, which went from a three-headed monster to a Dulli joint after the first release, Greg was able to expand his sound, explore new ideas and indulge, for better or worse. While I love Power Burns, and put it up amongst his best work, the last record Dynamite Steps made little impact with me. When it was announced the band was reuniting, first for a show, then a tour, then a new album, I was excited, but the quick departure of original guitarist Rick McCullom left me scratching my head for a bit. McCullom's slide work was a key part of their sound for me, providing a counter to Dulli's minimalist riffing and creating a tension unique to the band.

Those worries were assuaged somewhat on the return album Do To The Beast. While a few tracks didn't connect (The Lottery, These Sticks), the vast majority of the album wormed its way into my brain and heart pretty quickly, and I now count several of the tunes (Matamoros, It Kills, Royal Cream) among Dulli's best moments. On the latest, In Spades, Dulli and band embraced mood and groove to an extent unlike before. I'm still conflicted on the record. I love the way it sounds, but the lack of memorable chorus melody hooks leaves me wanting more. Maybe that's the point. I still enjoy listening, but I wish there was a killer hook like Going To Town or Somethin' Hot. 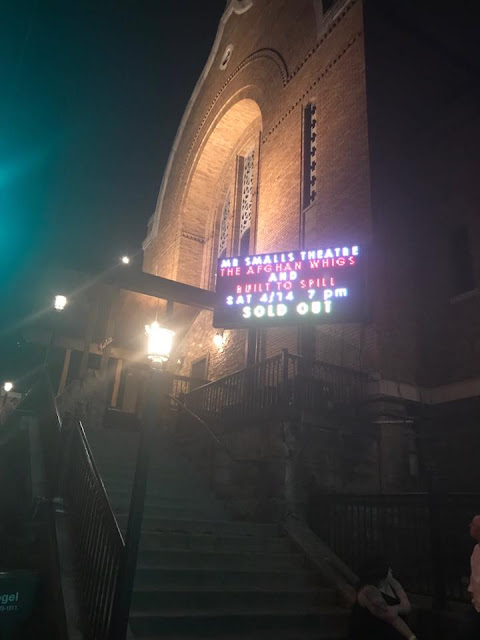 All this was swimming around my brain as my wife and I drove three plus hours from Columbus to Pittsburgh to take in the Whigs and Built To Spill double bill at Mr. Smalls in Millvale. To be honest, when I found out the Whigs would be playing at 8:30 PM, second between openers Rituals of Mine and closers Built To Spill, I was pretty elated. Getting old, being mid-40s, means standing around at shows like this becomes quite painful after two hours or so.

We arrived towards the end of the set by Rituals of Mine, a male/female two piece who were good, just not my thing. After stage switch-over and soundcheck, the Whigs sauntered on just past 8:30. We found a nice spot, stage left, about four folks back. Opening with Arabian Heights off the latest album, the band started in an energized groove they rarely left the entire night. You can read the entire setlist here, but I'll say of the three times I've seen them, plus two additional shows with Dulli fronting different incarnations of The Twilight Singers, this was the best I've ever heard them. The band is tight, you can tell this is a unit comfortable with each other, and they blazed through each song.

Vocally, Dulli has always been slightly better live to me than on record. There are times on the new album when his voice disappears almost completely into the music, whereas he was full-throated and powerful the entire night. He is a frontman in a way that few artists can pull off today - his punk and indie rock upbringing combining with a love for soulful showmanship. I don't know if it was the condensed time playing second, but there was little to no b.s.'ing by Dulli, and most of the tunes didn't get introduced as the band moved quickly from song to song.

When the set ended, with Dulli walking off after introducing the band, leaving them to play him out, I knew we a) witnessed the best concert of his I've ever experienced and b) was sweaty and ready to leave. We didn't stick around for Built To Spill. Maybe we'll catch then another time, but there was nothing left in the tank, so to speak.

I don't know if alternative rock was meant to last for thirty years. The idea of punk rock bands still doing it at fifty years old seems odd to me, but the Whigs always seemed slightly out of step with their peers, and I'm now realizing that the individuality has made them timeless. In Spades doesn't sound like 2017 or 2018, and it doesn't not sound like 2017 or 2018, a statement I can make about Black Love or Congregation and their respective release years.
Labels: 2018 built to spill concert greg dulli live millvale mr. smalls pittsburgh review rituals of mine the afghan whigs