I've Run Out Of Words

The new Failure album is good. Very good. Really good. Really, really good. I mean, what am I supposed to say? After a nineteen year break, the band released The Heart Is A Monster in 2015. That was also really, really good. To people like myself, their 1996 album Fantastic Planet is a pillar, a decade best, genre defining widescreen epic of mind-bending muscle and delicate dissonance.

The Heart Is A Monster shouldn't have been as good as it was, that break should have dulled the hard edges, but the band took all the elements of their time away, and reconstituted with cunning and bombast. The Stockton to Malone like weave of Ken Andrews and Greg Edwards vocals, bass and guitar duties was a thing of beauty, never showy, but draw dropping nonetheless, backed by the primal thump not-so-secret weapon Kellii Scott.

And now, this year, in 2018, they drop a Voltron-esque four EPs, merging to form the beast that is In The Future Your Body Will Be The Furthest Thing From Your Mind. And I'm left speechless. I've been listening to each EP as they've been released, with a few months between to properly digest, until finally the whole damn thing came together. And I'm stuck. Having already spilled enough superlative ink on the last two, I'm at a loss. 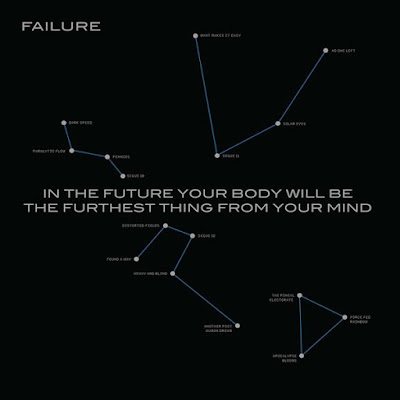 Fantastic Planet sounds great. The Heart Is A Monster sounds even better. This one? Somehow, in some incalculable way, Ken Andrews (I'm assuming, wizard that he is) has crafted a sonic pallet that inconceivably has more space with less noise but sounds gigantic. What? How is that possible? It doesn't hurt to have three incredible players involved, who have honed and chiseled their skills with insane levels of nuance and precision. There are no wasted notes, everything has purpose.

So what do we, the listener, end up with? Obviously, another incredible album, unlikely anything being made at the moment. Heavy yet subtle, melodic yet noisy, expansive yet direct. Most albums reviews happen in hours or days. I've been sitting with this thing for a month and still cannot wrap my head around the entire thing. It doesn't make sense that this band is successively getting better with each release, after all this time, at this age, in this climate for rock music, and yet, here we are.
Labels: 2018 failure fantastic planet greg edwards in the future... kellii scott ken andrews music the heart is a monster