If you were to ask me for my top five current bands in 1999, at the time The Smashing Pumpkins would have been on that list. I was not on the Gish train, it wasn't until the single "Today" from Siamese Dream slid into heavy rotation on MTV in the later half of 1993 that I got on board, scooped up Gish, and started buying everything I could get my hands on. If a UK 3-song single appeared in the bins of either Madhatter's or Finder's in Bowling Green, I was grabbing it. I obsessed over Pisces Iscariot - "this compilation is better than most bands regular albums!" - and fully digested Mellon Collie and the Infinite Sadness. The Aeroplane Flies High single box? Purchased. Huge left turn with Adore? Not a problem.

After the turmoil of 1998, the death of Jonathan Melvoin and departure of Jimmy Chamberlain, I wasn't sure what to make of the band, as they seemed to heading down the road of collapse. However, in 1999, it was announced Chamberlain had rejoined the band, reforming the original lineup, and the band was heading out on a nine-date tour dubbed "The Arising!" with Queens of the Stone Age as the opener. There are a lot of things, in retrospect, that changed after this tour. First, it was D'arcy Wretzky's last tour with the band, soon replaced by Hole bassist Melissa Auf de Maur. Second, Queens of the Stone Age were largely unknown, and just over a year later would release their second album, but first as a true full band, Rated R. Queens when on to become the hard rock band of the 2000s, and it could be argued that this tour was a preview of the passing of the torch. How so, you may ask?


Within a year, the Pumpkins would release Machine/The Machines of God album. It's not a bad album from a songwriting perspective, there are great melodies and hooks on this album to match their 1990s output. However, in a clear bid to chase the down-tuned heavy nu-metal sound that fellow 90s alum Stone Temple Pilots attempted on the song "Down" from No. 4, there is a stamp of age on this record that simply does not hold up and sounds cringeworthy at times. Too many brittle guitar tones combined with too much digital processing and phony heaviness that just muddles everything. Personally, I far prefer the bootleg (and someday officially released) Machina II/The Friends & Enemies of Modern Music. But enough about my reminiscing, what about the show? 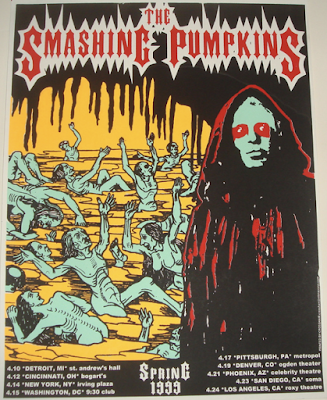 I had been to Bogart's before, so I knew this was a special place to see the Pumpkins. With a capacity of 1,500, this was far below 15,000-20,000 seat arenas the band would typically play. That meant the place was absolutely packed with zero room to maneuver and hot as hell. To be honest, I don't remember a single moment of Queens set. I'm not going to pretend like, oh yeah, they were awesome and I totally predicted they'd be huge. Nope, complete memory loss. To be fair, I couldn't have cared less - I was there to see the original Pumpkins play.

Below is the setlist, and as you can see, they opened with I Am One off of Gish. It is the first and only time I have ever been in a crowd that pogo'd. The entire room was a wave of humanity rising and falling in a way I had never experienced before and have never experienced since. The joy of having Chamberlain kick off the evening after his very public problems was an incredible way to kick off night, and the band did not let up for one moment.

When they tore into Glass' Theme, it was definitely a "holy shit" moment. The new song was absolutely on fire and unlike anything on Adore, and foretold the heavier direction was the band was heading, along with tunes like Dross and Cash Car Star that ended up on Machina II. They managed to toughen up older tracks like Pug and Ava Adore to fit the new sound, which was aggressive bordering on out of control at times.

Looking back, it's a truly a last gasp for me. Machina would be released, and the spark would fade. I appreciated the interesting but uneven Zwan album from 2003, and even liked parts of Billy Corgan's solo album TheFutureEmbrace from 2005. By the time Corgan reformed the Pumpkins for Zeitgeist in 2007, it was in name only both in the line-up and music, and it's never been the same for me since. That's not uncommon, a listener can grow musically in a direction that the performer may not, and that's okay. I kept checking in with whatever Corgan was putting out up until the point his politics and behavior made it apparent I could not no longer stomach supporting him, so I haven't bothered with anything since 2014's Oceania, which I ultimately did not care for.

Revisiting the band for this post, it becomes apparent that the Pumpkins put out an incredible body of work in the 1990s, nearly unmatched in quality and quantity by any other artist. I'm glad I got to end the decade seeing them at this show which captured the band at a performance peak.