Welp, the bucket list gets another strikethrough as I finally got to see Tom Petty and The Heartbreakers live. My wife and I grabbed tickets as soon as they were announced – this one wasn’t going to get missed. And thank goodness for that, as this was an amazing performance. Granted, the material leaned more towards the mid-tempo, but damn are there a lot of fantastic tunes in the mid-tempo for Tom and the gang. 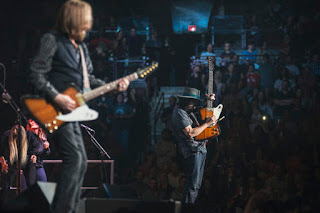 It cannot be overstated how massive the hits catalog is for Petty and crew. After three absolute bangers to start, it felt like we had heard an entire concert by most bands, but he was just getting warmed up. Aside from a detour into some deep tracks on Wildflowers, a not unwelcome journey, he landed punch after punch of radio songs and fan favorites. Of course getting to Petty live is a joy, he’s got a laid back cool that is unmatched, but his band is another level. Benmont Tench and Mike Campbell are simply unmatched in creative restraint, playing the exact perfect melodies and riffs that each song calls for when others would overplay and jam needlessly.

This was one of those rare occasions when my wife and I actually stayed to the last song of the encore because we simply had to witness and hear every note the band played, even if it was the familiar jangle of American Girl.
Labels: 2017 columbus concert joe walsh live music review schottenstein center the heartbreakers tom petty tom petty and the heartbreakers