I’ll be honest, I haven’t kept up with Wire like I should, which is dumb because I’m now just discovering all their ’00s releases and it has been a revelation. That said, when it was announced these post-punk legends were playing a bar in Columbus a few months back, I wasn’t going to pass up the opportunity to see them. My wife agree to go knowing nothing about them other than me dropping the nerdy knowledge that their tune “Three Girl Rhumba” was the basis for the guitar riff in Elastica’s 1990s hit “Connection.” 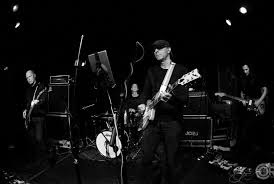 So, this show was genuinely one of discovery, because aside from the opener “Ahead” and a few other tunes, most of the night was unfamiliar to me, which is not a bad thing. Actually, one of the joys of this show was being able to watch bassist Graham Lewis work his craft, who I would put up there with Peter Hook as being one of the most innovative and distinctive bassists of the post-punk era. Having never seen them live, one thing I took away was how much Lewis up-plucked his picking hand on the strings, which gave his notes a bit more pop and attack.

We left mid-song during the end of the set, and my wife and both remarked how small we felt, having spent the night in the balcony sitting in stools, and then having to make our way to the front door via the first floor crowd. I’m not sure if I’ve started shrinking, but it felt like we were walking through a forest.
Labels: 2017 ace of cups columbus concert live music review wire